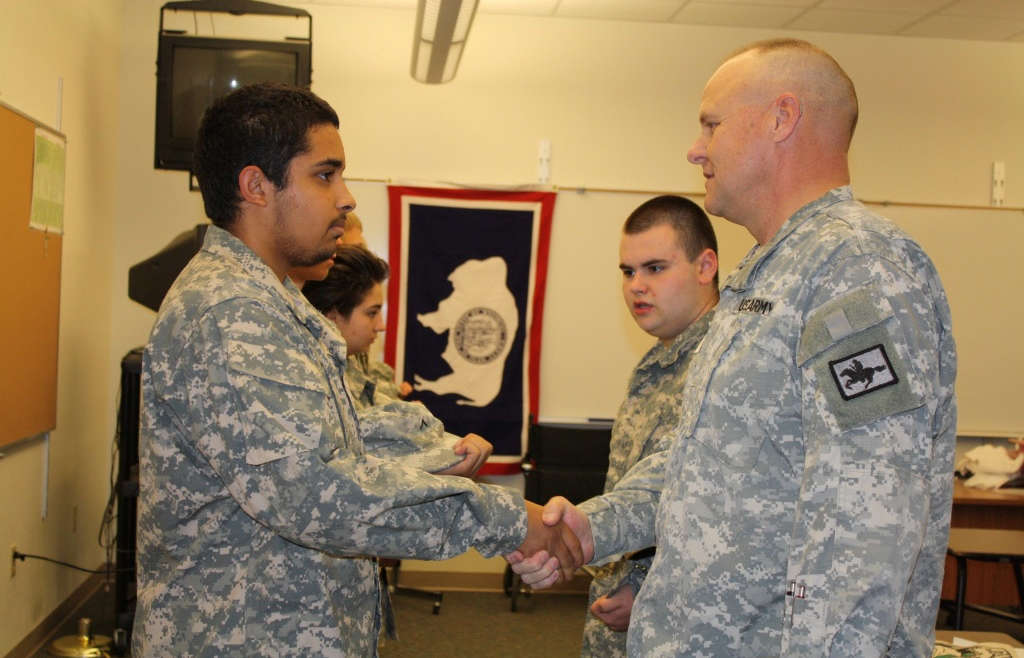 Mount’s day started at 7 a.m. at a zero hour class at RHS where Military Science Instructor Cody Myers had 13 cadets drilling. At 9 a.m., Mount entered a classroom at Lander Valley High School and a group of eight uniformed students were called to attention. After the Lander visit, Mount headed to Wind River High School at Pavillion to inspect the Military Science class there.

At LVHS, the Military Science program offered by Fremont County BOCES replaced the Naval Junior ROTC program the school previously offered. The ROTC program in Lander was discontinued by the Navy in 2010.

Mount was greeted by the Lander students, and he then proceeded to shake hands with each of them. Prior to his arrival, the students inspected each other, making sure their uniforms were in proper form.

Mount’s message to the students was the same at each of the three stops.

“I appreciate what you’re doing,” Mount told the class.

He said it’s important for people to get involved and be willing to wear the uniform.

Mount then proceeded to give the students some life advice.

“It’s important that we all establish our own personal values,” he said.

He emphasized the importance of taking “hard rights” versus “easy wrongs.” “Personal courage is also the moral courage to do what’s right,” he added.

Mount encouraged the students to be loyal to each other and to have integrity. He said that they shouldn’t worry or think about promotions, adding that making the right choices will lead to natural promotions. He said through his career, he’s only done what he’s thought was best and has worked to the best of his ability. Those efforts, Mount said, led him to where he is today.

He said when challenges arise, they should “eat the elephant … one bite at a time.” Later, he said that it is OK to ask for help.

Mount then fielded questions about his career from the students. He said he has been in the service for 38 years, enlisting shortly after turning 18.

“In my mind there was never any doubt,” he said.

Six of the eight students raised their hands when he asked who was considering joining the service in the future. He said to prepare for bootcamps in any military branch, they need to be in top physical shape.

He told one student that her consideration of the U.S. Air Force was a good idea due to branch’s technical schools.

Mount also spoke about some of the toughest challenges of his career, two of which included commanding other groups of soldiers. Working in Iraq, managing radar monitoring for rockets was probably the most difficult, he said. He described 18-hour days and feeling in over his head. He was responsible for choosing whether or not to engage the incoming rockets.

The LVHS Military Science class instructor, Ken Perssons Jr., said the class teaches students about all branches of the military. It teaches them disciplinary values, leadership, problem solving, physical fitness, and drill and ceremony techniques. The class was formed in January. The class will be involved with providing a color guard for community events. Perssons emphasized the help from Lander businesses and nonprofits for their donations to the program. The class is currently studying land navigation. 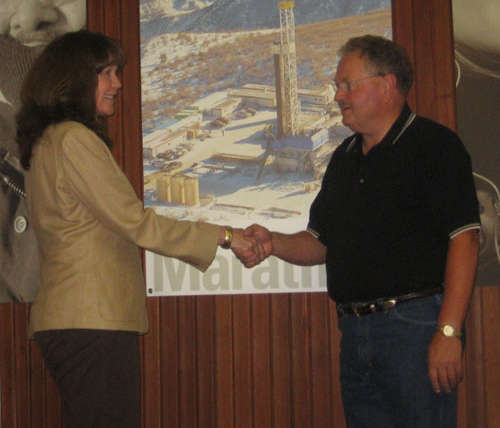